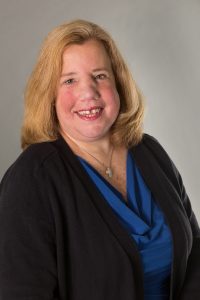 In October 2017, Vicki joined the Greater Dundalk Chamber of Commerce as the Executive Director. Since her arrival, Vicki has been focused on enhancing the value of our membership, establishing new programs, and networking opportunities. She has been the driving force behind the development of our new website, improving its functionality and increasing the benefits for our membership.

For the past 15 years, Ms. Young has owned and operated IVY Services, LLC, a small women-owned printing business.  The company sells print, promotional products and apparel. Prior to establishing IVY, Vicki worked for Oles Envelope Corporation for almost 20 years ending her career with OEC as Vice President of Human Resources. In addition, she is co-owner of the Baltimore Breakfast Clubs, LLC, a local business networking group that meets to help fellow members build and grow their businesses.

Vicki graduated from Villa Julie College (now Stevenson University) with an Associates of Art degree in Business Administration in 1989. She returned a year later and obtained a Bachelor of Science degree in Administrative Sciences in 1992. In addition, she holds a Master of Science of Applied Behavioral Science with a concentration in Human Resources Development from in Johns Hopkins University which she completed in 1995.

Ms. Young is dedicated to serving her community and her church. She has served on a myriad of boards and volunteered for a variety of organizations including Casey Cares Foundation, Opera Vivente, the Archdiocese of Baltimore, Villa Julie College and Notre Dame Preparatory School. Most recently, she served as President of the Board of Directors for the Historical Society of Baltimore County. Previously, she held a position on the Board of Directors for the Msgr. O’Dwyer Retreat House where she was elected President of the Board for two years.

In her free time, Ms. Young loves to spend time with family and friends. She is the proud aunt of 5 nieces and nephews and 6 wonderful godchildren. She has resided in Towson for the past 20 years.

Vicki can be reached at the Chamber Office at 410-284-3700 or via email at ed@gdcoc.com. Please feel to contact her at any time. Vicki looks forward to continuing to serve the Greater Dundalk area with a focus on “Connecting Businesses and Building Community.”